Conduction electrons in metal or metal-like nanomaterials can be coherently excited by incident light to collectively oscillate at metal/dielectric interfaces. The collective oscillating mode of electrons and the nanomaterials that support are referred to as surface plasmons and plasmonic materials, respectively. There are two types of surface plasmons: (i) localized surface plasmons (LSP), in which coherent electrons oscillate around the NP surfaces or nanoscale crevices, and (ii) propagating surface plasmons (that is, surface plasmon polaritons (SPPs)), in which the coherent electrons oscillate as a longitudinal wave at extended metal surfaces. Nano-optics, especially the sub-field plasmonics is the study of light at nanoscale and the study of the interaction between light and nano-scale objects supporting surface plasmons.
Surface plasmon supports the characteristic extinction energy and strong electromagnetic field in the vicinity of the nanostructures, which has great importance for a wide variety of applications ranging from biosensors, spectroscopies and microscopy, optoelectronics and solar cells.
Our research interests in nano-optics and plasmonics are to rational design novel nano-devices for nano-spectroscopies, nano-sensor and nano-imaging based on the comprehensive understanding of the mechanism of plasmon-enhanced spectroscopies and its correlation to the plasmonic properties of nanostructures, by means of new theories, concepts and simulation methods. The relation of our plasmonic researches to other researches in our group could be described in Figure 1. 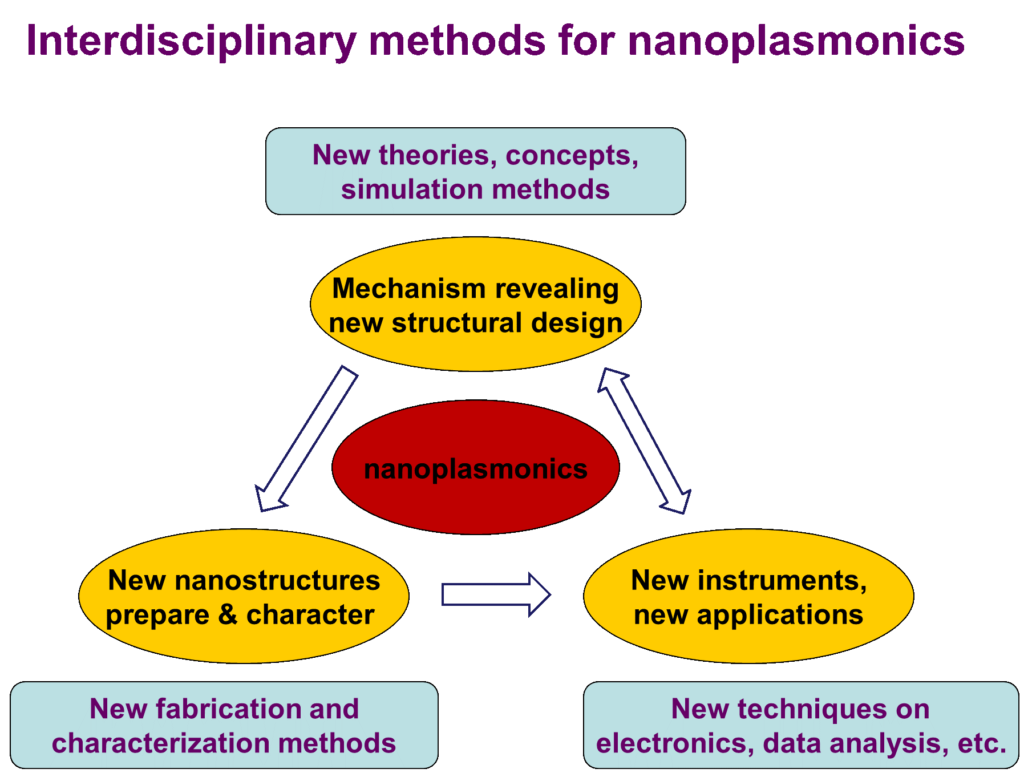 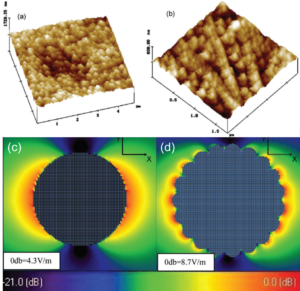 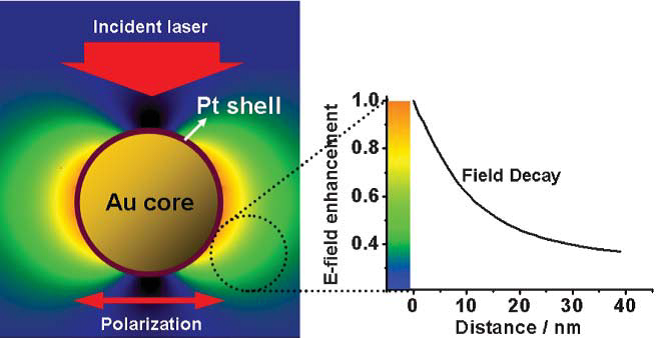 Figure 3. Schematic illustration of the electromagnetic field distribution around Au@Pt core–shell nanoparticles under laser irradiation (left). The dependence of the electromagnetic field strength (normalized with the strength on the Pt surface) on the distance from the Pt shell is shown in the right plot, indicating a substantially strong field enhancement can still be obtained on the surface[2].

1. The first and second generations of hotspots
The first generation of hotspots were generated from single nanostructures such as nanospheres and nanocubes (FIG. 4a,b), or nanorods freely suspended in a homogeneous medium. These hotspots exhibit moderate SERS-activity; however, some rationally designed single nanoparticles with sharp corners and/or with intra-particle gaps, such as Au and Ag nanostars, nanoflowers and mesocages exhibit much higher SERS-activity.
The second generation of SERS hotspots are generated from coupled nanostructures with controllable inter-particle nanogaps (for example, the NP dimers shown in FIG. 4c,d or oligomers and NP arrays shown in Fig. 4e,f) or inter-unit nanogaps in nano-patterned surfaces (FIG. 4g,h). Such hotspots exhibit excellent SERS activity. Because the average SERS intensities from coupled plasmonic nanostructures are typically 2–4 orders of magnitude greater than that from single nanostructures, they are more commonly used for trace-molecule detection. SERS hotspots from coupled nanostructures are extremely small (1–5 nm), but the Raman signals of probe molecules at the hotspots contribute significantly to the total Raman signal. 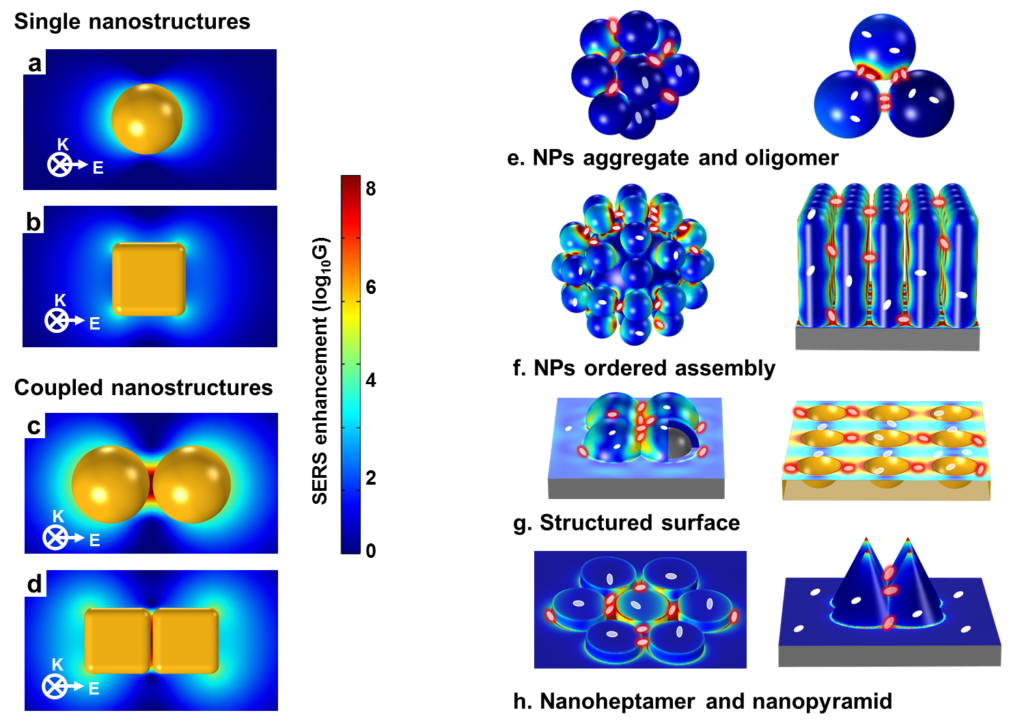 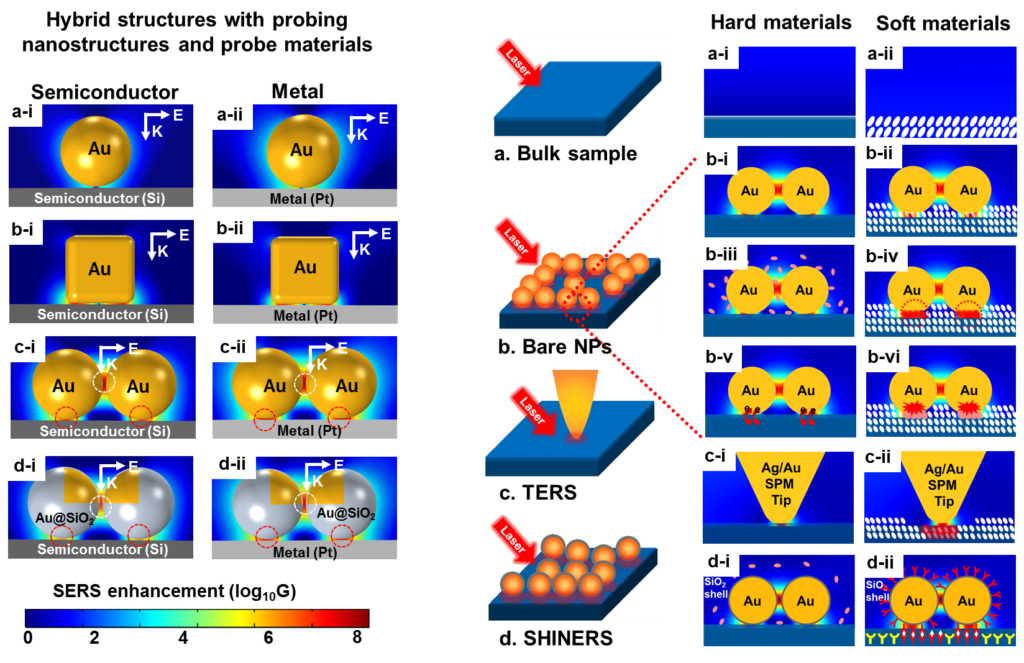 3. The plasmonic nature of SHINERS from general materials
SHINERS is a representative technique supporting third-generation hotspots. The working principle of SHINERS for gold, silver, and more general metal single-crystal surfaces have been extensively studied in our group[4-8]. 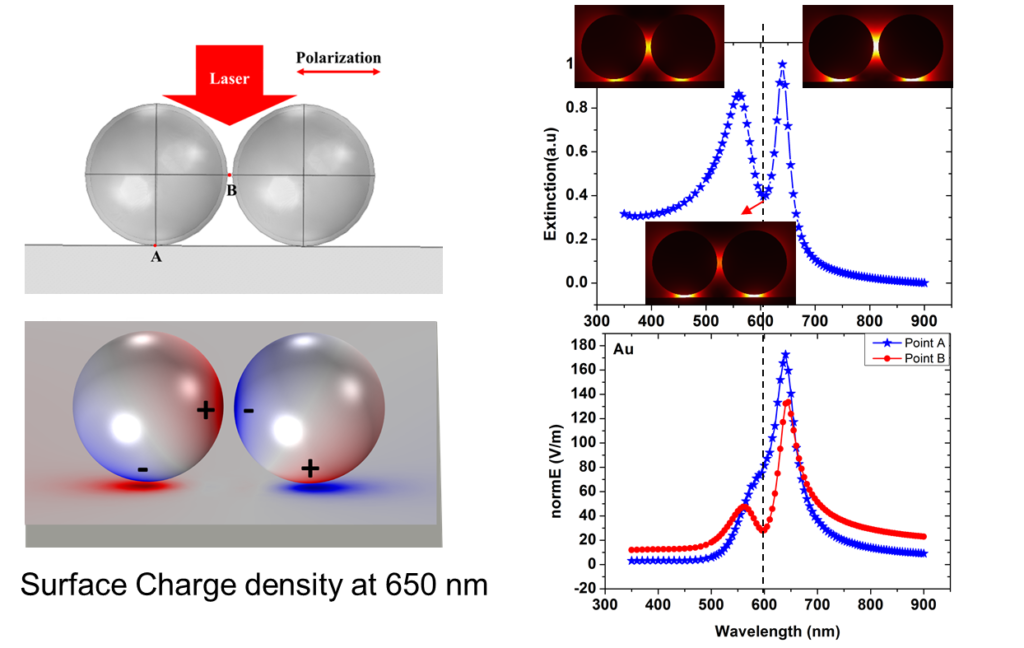 Figure 6. Fano Resonance nature of a Au@SiO2 nanoparticle dimer on a flat gold surface. Coupled dipole of Nanoparticles induce the imaginary dipole on the metal or dielectric surfaces, to form a magnetic-dipole-like mode. It is the plasmonic dark mode with less irradiative efficiency, but with strong near field.